Our doctrine is “Reformed”: a reference to the Bible doctrines re-discovered at the time of the Reformation in Europe. The ‘shape’ or government of our church is Presbyterian. This means that each congregation elects their office-bearers & minister to pastor them as was the case in the churches of the New Testament. These elders then group together in local church courts called Presbyteries. We also have regional Synods and a church-wide General Assembly. 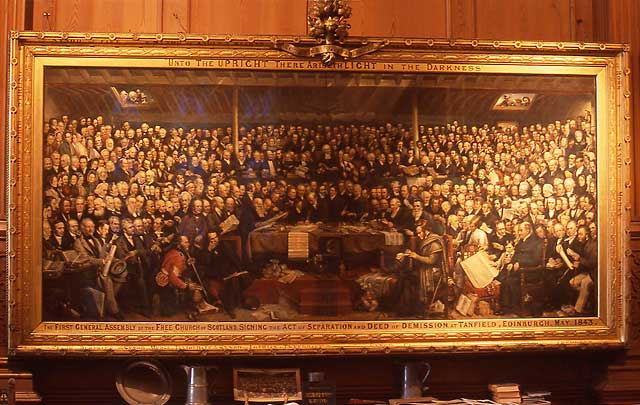 The immediate cause of the Disruption was the insistence by the civil courts that the Established Church had to ordain men to the parish ministry irrespective of their acceptability to the parishioners. The Evangelical Party regarded this as an intolerable interference in the spiritual liberties of the church and so they withdrew from the Established Church to form the Free Church. The Disruption was not intended to be a disruption or division of the Church. Rather it was to be a severing of the link that bound the Church to the State. However, since the Church was not of one mind regarding the proposed action, the Church itself was split. The Established Church remained and the Free Church, claiming to be the same church as that which it had left, a church adhering to the same Confession of Faith, loyal to the same principles and differing only inasmuch as in the discharge of its spiritual function it was to be subservient to no other authority than the will of God as understood by the collective mind of the Church, came into being.

The Established Church and the Free Church were not the only Presbyterian Churches in nineteenth century Scotland. In the eighteenth century there had been more than one secession from the Church of Scotland giving rise to the formation of several groupings with distinctive confessional standpoints. In the late nineteenth century a movement to unite the splintered Presbyterian Churches in Scotland was begun. Not surprisingly, given the different, not to say opposing, nature of the confessional formulas of the various churches, union was possible only on the basis of compromise – an agreement to adopt a confession of faith sufficiently vague and elastic so that those holding different views could subscribe to it with good conscience. When the Free Church was confronted with this dilemma, a minority took the view that the doctrines which were being treated as open questions were so vital to the faith that the duty of Christian unity had to yield to the higher duty of fidelity to the truth. The consequence was that when the great majority of the Free Church entered the Union of 1900 to form the United Free Church of Scotland (and in 1929 to reunite with the Church of Scotland) a small minority elected to continue the Free Church of Scotland. The adherents of this ‘constitutionalist’ party, as it was termed, were to be found mainly, although not exclusively, in the Highlands and Islands of Scotland. Today the singing of the Scottish Metrical Psalms unaccompanied by instrumental music is, perhaps, the most distinctive feature of our liturgy, but the chief emphasis of our worship is still to be found in the centrality of the pulpit and the proclamation of a free and sovereign salvation.

The Free Church has continued down until the present day. At the Commission of Assembly in January 2000 a division occurred because a majority was determined to act in a way that was against the constitution or ‘rule book’ of the church, which all office-bearers must uphold. A number of ministers and elders signed a ‘Declaration of Reconstitution’ in which they pledged themselves to continue the Free Church in a constitutional manner. They are the Free Church of Scotland (Continuing). The addition to the title makes us in no way less ‘Free Church’ than we were before the sad division of 2000.

This article is taken from the official Free Church of Scotland (Continuing) website, located at www.freechurchcontinuing.org