Sandals hold a universal status as the footwear of choice in warmer climates, a trend that seems to cross the barriers of time and locale, as is evident to those who crack open the Bible. As one might expect, the people of India and Sri Lanka shod their feet exclusively with sandals when outdoors. The old adage, “when in Rome, do as the Romans do” is appropriate when dealing with matters that are indifferent. Consequently, my ten toes have not seen the inside of a pair of shoes since prior to leaving home three weeks ago. The only exception to wearing sandals comes upon entry into a private building (e.g., home, church, etc.), at which point everyone heaps their sandals into a pile outside. So for the last two Sabbaths and during the conference last week I had the unique experience of preaching in bare feet, which served a small taste of what it was like for the early church.

At the conference last week we were asked to address the topic of “The Godly Family,” in which we covered vast swaths of ground, expounding the Bible’s instruction for husbands, wives, parents, and children. Admittedly, I entered the work unsure of how my material would intersect with the people in this culture, but I took confidence in knowing the universality of sinful human nature and the full sufficiency of the Word of God. The same problems and same solutions exist the whole world over. The impact on the people proved the truthfulness of this assessment.

Several people expressed their gratitude, affirming that the application of the Word had spoke into their particular situations. Others added that this was their first exposure to this kind of material. I am called to feed Christ’s lambs, praying that his sheep will hear his voice and follow him. We glorify God for the gracious work of his Holy Spirit on every occasion in which that transpires. To his name be the praise.

Yesterday (the Sabbath) I preached on Zechariah 4:10a in the morning service, taking up the theme “a day of small things,” and in the afternoon service I expounded Jude 1b on the description of the Christian. The Lord brought unbelievers to both services. The unaccompanied singing of the Songs of Zion in the Tamil tongue  sweetened the service. A few of the tunes matched those in our own Psalter, enabling us to sing along quietly in English. Pastor Parthee read the designated passages from the Tamil Bible and translated as I expounded the Word in preaching. We enjoyed a blessed day in worship, rest and fellowship with the Lord’s people. I attached a couple pictures of the Tamil metrical Psalter, which is yet incomplete.

After the second service we walked to the house of a paralyzed Christian man. The home bore all the marks of significant poverty, but the atmosphere of the home carried the sweet fragrance of the presence of Christ and his grace. I shared some of the morsels gathered from my own experience of suffering and also gave him a summary of the second sermon. Pastor Parthee visits this man week by week, feeding him in person with the Word proclaimed in the assembly.

Randy and I have stood amazed at the colossal amount of charitable work that the Lord is enabling Parthee to carry out in his community. Since I have to leave some things to tell you in person, I’ll save those accounts for when I return home.

This morning we caught the 5:45 a.m. express train from Vavuniya to Colombo, which left 30 minutes late. We have joked about being on “Sri Lanka time” throughout our visit. Whenever time is mentioned it implies: “give or take an hour.” Parthee, Randy, and I were the only passengers in our box car, which was the only air conditioned compartment on this train. The last time we experienced the feeling of AC was the whisper of coolness that trailed behind us as we exited the airplane a week ago.

But here the fun begins. As we bounced down the tracks toward Colombo the rear of our particular box car caught on fire. We were less than an hour our of Vavuniya. Flames peered at us through the back door as the compartment filled with smoke. A bit of panic ensued as the staff scrambled to dump jugs of water on the fire, while one of them dowsed it with the fire extinguisher, but the fire persisted longer than anyone hoped. I dutifully hung my head out a window in search of fresh air and to escape from breathing the toxic smoke. From what I can gather the generator overheated, spilt fuel and caught fire. At least we did not have to leap from a moving train like in the old cowboy movies. The Lord showed mercy yet again.

The express train was stripped of its express credentials, as the train obviously came to a stop to address the drama. Apparently the personnel spent an hour searching for a replacement car, which proved non-existent. When the train finally lurched forward again we were without a generator, which meant no electricity . . . which meant no more AC. The Lord gives and the Lord takes away, blessed be the name of the Lord. We submitted to the Lord and went back to “Soakdom”, that abode of perpetual wetness. The late departure combined with all the other exciting activity resulted in arriving in Colombo two hours behind schedule.

Parthee’s brother picked us up at the train station, took us to a store and then to get a bite to eat. Then we bade farewell to our  beloved brother, Parthee, and drove one hour in a taxi/van to our hotel, arriving just a short time ago. It is now 5:00 p.m. on Monday. All that remains before leaving for the airport at around 11:00 p.m. is a hot shower, finishing these posts, and some brief sleep.

I have much more to convey to you, but if I include everything in the posts, then I will have little to report when I get home.

Sri Lanka has captured my heart. The Lord has instilled a deep love for this people and their land, and that affection will fuel my prayers in the days ahead. I hope that even this remote connection enables you to say the same. 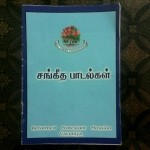 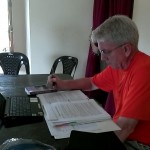 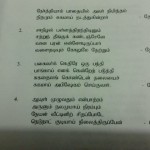 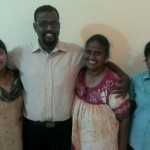 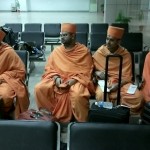