It is Saturday evening, 6 Apr and I thought I’d better get an update out before the Lord’s Day. I apologize for not getting one out this week after letting you know we’d arrived in Sri Lanka, but it’s been a blur. I greatly appreciate the prayers. Our health is doing fine and we are tolerating the high humidity, no a/c, and no hot water but hot and spicy food. Here is a run down of the week:

– Tuesday: Parthee took us all over the north part of the island to see some historical sites related to the recent civil war between the Tamils (Parthee’s ethnic group, which makes up about 30% of the population) and the majority Sinhalese (70%). This conflict stems at least in large part from when the British pulled out as the colonizer and handed over Tamil land to the the Sinhalese. The Tamils were successfully labeled as terrorists for fighting for freedom from oppression.

– Wednesday: We had a much needed and welcome day of study, preparation, and some rest.

– Thursday: We joined the mid-week prayer meeting/Bible study for Parthee’s church plant. I did a lesson on excellence vs. mediocrity from Col. 3:23-24. It was so-so 😉 The family that hosted the meeting then gave us supper. The husband is Maran (pronounced mahr-an), and he was the pastor of a charismatic church, but after meeting with Parthee over time became convinced of biblical Reformed principles and resigned his pastorate because of his new biblical convictions. When he resigned he had no prospects, but the Lord is providing for his family through various odd jobs and working part-time for an NGO. He is a solid and faithful man and Parthee thinks he may be a future church planter. Attached is a picture of Rob and I with his family (boys aged 17 and 11).

– Friday: We each rode on the backs of motorcycles for about 15 miles over some really bad roads to a church out in the country for the first of two sessions of teaching on family. I taught on man as leader in the home breaking out five areas:

It was well-received. A young man Parthee is working with named Ben (for short) has been hanging out with us much of the week, and he said it was really helpful to him as he was just married in January.

– Saturday: We went back to the country church and Rob taught biblical principle regarding wives and children. He did a great job clearly laying out from scripture what the Lord expects from wives and children. Afterwards the Pastor invited comments and questions. There were many positive things said, but one lady said that she had prayed for a long time for such clear teaching on family issues, that she and her husband had already talked a lot about the teaching from yesterday, and they were going to be re-arranging their priorities. She said we spoke the words of God to everyone. (pictures attached).

Afterwards, we went to a pre-school sports program sponsored by Parthee’s church as part of an outreach program to the Hindu culture. Rob and I were honored guests and were given some large flower things to wear around our necks (see pictures) which we comfortably wore for about 2.5 nanosconds. The kids competed in various events, Rob gave a short talk on “courage” and then we took turns handing out gifts to the kids (see picture).

Tomorrow Rob will preach twice at the church plant (which meets in Parthee’s apartment). Monday we will leave early on the 5:45 a.m. train to Columbo, arriving at 11 and having some lunch and opportunity for shopping for gifts, then we will check into an airport hotel around 2 pm and try to get some rest before having to leave for the airport at 11 pm to begin the long trek home. 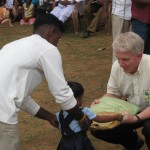 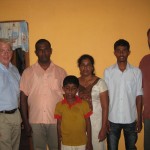 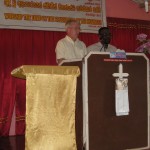 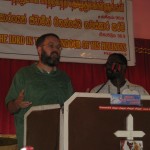 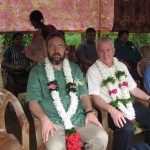 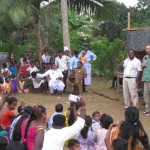