If Buddhism touts itself as the national religion of Sri Lanka, why do I observe so few vestiges of it in Vavuniya?

While I knew that Buddhism dominated this island, I did not realize that the stronghold was mostly contained in the Sinhalese regions of the nation. The civil government promotes Buddhism, and Buddhist monks ensure high visibility for their religion. But Parthee interacts very infrequently with Buddhists, and feels little threat from them, because that religion exerts minimal influence in the Tamil sections of Sri Lanka. The Buddhists also use the Sinhalese language (and Parthee’s Sinhalese is limited, especially his religious vocabulary). The heavyweight title among pagan religions in the northern environs goes to Hinduism. So please take all that I wrote about Hinduism in India and cut and paste that into your mental image of Vavuniya and all parts north and east in Sri Lanka. Within the Christian religion, the Charismatics take the cake nation-wide.

At this stage in the trip, the compounded exhaustion begins to take its toll. We are drained. In the words of George Whitefield, “I am weary in the work but not weary of the work.” Today was brimming with activity. Randy conducted three hours of instruction last night, and I taught for four hours this morning. After all of the travel, we ended up with less than 30 minutes before being whisked off to a sporting event organized by Reformed Christians. Large numbers of Hindus attended the event, and we were presented as special guests. At one point in the ceremony I was called upon to bring greetings and deliver a few brief words. We have returned home and await supper, which is usually served between 8:30-9:30 p.m.

Tomorrow brings another blessed Lord’s Day. I am slated to preach in both the morning and evening services, with Parthee serving as interpreter. Conducting a Free Church worship service, albeit in Tamil, will be reminiscent of home, and, honestly, it only intensifies the longing to be back. I am now beyond eager with three days and counting remaining.

Nevertheless, I hope and pray to give my strength to serving the Lord and his people with an full heart, acutely aware that tomorrow officially concludes my labor in this wonderful country. We will certainly be remembering you before the throne of grace, seeking his divine presence and blessing on the public assembly back home.

On Monday morning we set our faces like a flint for home. The first stage in our long journey commences with boarding a train at 5:30 a.m., which will haul us back down to the capital, Colombo. Lord willing, I’ll fire off another post Monday morning with further details of what follows. 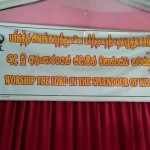 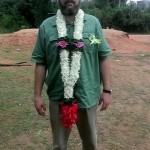