You should liken knowing Rev. Shanmugam Nixon Vigaya Partheepan to knowing a dark skinned, Sri Lankan version of John Knox, with a broad, bright smile. His burden for his people and love for the gospel unites with a tenacious commitment to full-orbed, biblical Christianity.

Someone needs to compile his aphoristic sayings and publish them in a book with a catchy title. For example, Parthee gathered with a small group of Presbyterian ministers in Sri Lanka who criticized him for being too narrow. In his quick and apt reply he thanked them for acknowledging that he had chosen the narrow way, since it leads to life, while pointing out that the only alternative was the broad road that leads to destruction. The arrow met its mark.

Here is another one that swept us off our feet. During his one and only visit to America (the same trip he came to a prayer meeting at GPC), he worshipped at a PCA congregation in Atlanta where some past missionaries to Sri Lanka were members. The worship service included several types of musical instruments accompanying the uninspired praise. He especially noted the wide variety of instrumentation. You have to know a little about the New Testament theology of worship to fully appreciate what follows. The couple eagerly approached him afterward to inquire about what he thought of the service. All he said, as he looked them in the eye was, “After all of that, I just thank the Lord that there were no animal sacrifices offered!” They were speechless. Knowing his warm hearted love for souls, you can be certain that he affectionately helped them to recover from the blow while explaining his deep love for the biblical principles of worship.

Another English-speaking foreigner came to lecture at a small congregation in the capital, Colombo, and the church requested Parthee to serve as interpreter for the event. In the course of the addresses the man began propounding a long day theory of creation and a geographically limited flood. But in Parthee’s translation of the address he asserted a literal six day view and a global flood, unbeknownst to the lecturer. After the address he explained his moral responsibility as a minister to protect his people from errant doctrine.

In two days I can already bury you with copious amounts of other “Piths from Parthee.” As you can readily see, he does not shy from an unyielding, no-holds-barred defense of the Reformed faith.

But please do not equate his resolute devotion to biblical truth with a somber disposition. Far from it. Unless you can picture a big cheesy grin accompanied by a belly laugh, your picture would be incomplete. He loves the Son of God while loving the sons of men. As one who knows the pains of childhood hunger, his compassion takes tangible shape in sacrificial generosity to those in need. His tenderness shines brightly through his gifted interaction with children, who all seem to flock to him. He cares for souls, and the recipients of that care know it.

You would be spell-bound to hear his life story. He grew up as a Hindu in the poorest family in his already poverty stricken village, and now he labors as an ordained minister in the Free Church of Scotland (Continuing), under the auspices of our Home and Foreign Missions Committee. You can read more about that story in his own words in the June 2010 issue of the Free Church Witness under the article, “Trusting in His Grace”, found here:

I will attempt to flesh out more about his life later this week.

When he describes the spiritual battlefield in Sri Lanka, he identifies two primary fronts: the Buddhists outside and the Charismatic Arminians inside, both of whom hold the vast majority in their respective places. So Parthee plans to pursue biblical reformation in humility and prayerful dependence upon the Lord of the harvest with a heart throbbing for Christ to have all the pre-eminence.

The metrical words of Psalm 80:14-19 immediately come to mind. May the Lord grant that heart cry for Sri Lanka.

And may this lush land overflow with spiritual fruitfulness to the glory of God.

P.S. The pictures capture Parthee preparing fresh coconut milk and flesh for us, which they consume in the middle of the hot afternoon. You see him picking the fruit from off the roof of the house. 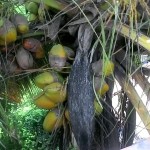 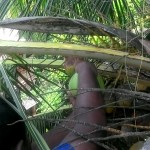 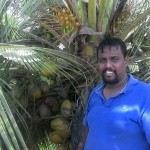 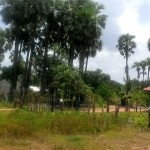 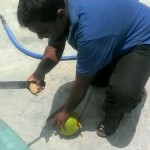