Pure religion and undefiled before God and the Father is this, To visit the fatherless and widows in their affliction, and to keep himself unspotted from the world. (James 1:27)

I am writing from Sri Lanka, while most of you are reading in America, but please turn your thoughts back to India for one more report on my final day there.

Hinduism propagates a principle of vindictive retribution, wherein they interpret every affliction as a punishment from the gods for some evil deed they committed. The outworking of this wretched doctrine crushes the most vulnerable in society, especially that class so precious to the Lord — the widows. If a husband dies before his wife, the wife is deemed culpable, and consequently, she inherits a curse that few can bear. Believers in India provide a Christian burial for their deceased, but the Hindus burn their dead. In the recent past, when a husband died, his living wife would be thrown onto the top of the wood pile and engulfed in the flames along with the body of her dead husband. Thanks to the diligence of Christian missionaries we have largely eradicated that practice, but the mentality behind it remains pervasive. These bereft women, already devastated by the loss of their husbands, now face alienation and neglect from their children and immediate family. They shoulder the hardships of deprivation, toiling for their own bread, even into old age when least capable.

In addition, Hinduism promotes male domination throughout society, where women cannot even go to “heaven” unless their husbands choose to bring them along as a slave. The girls are raised to view their husbands as gods and to spend their strength attempting to please him at all costs. It takes little effort to see the depraved incentives behind concocting this religious idolatry. Lost mankind always strives to supplant the place belonging exclusively to the only true Sovereign.

Now turn your attention to a slum on the east side of Ahmedabad where the gospel of Christ ignites an explosion against the background of pagan superstition. It was March 31, and we were gathered with a growing assembly of Christians for Sabbath worship. Randy and I were seated as guests at the front of the auditorium facing the congregation. I could not comprehend an ounce of the minister’s lengthy prayers, but his ardency was keenly felt. Likewise, though we were unfamiliar with their Gujarati praise, the joy beaming from this dark corner surely spoke volumes to those who heard it. Nish served as interpreter when I was called upon to preach Christ to the people, and I noted several onlookers from the community who stood outside the assembly peering through the many large openings around two sides of the hall. To be honest, I struggled more than I had hoped, but I had to trust the Lord to demonstrate his power in my weakness. Nonetheless, the sight and thought of these precious people moved my soul. We were told afterward that about 50% of those in attendance were unconverted.

The Lord granted the privilege of ministering to these outcasts, and the events following the benediction intensified our appreciation for their witness. The church had prepared 20 sacks weighing about 50 pounds each, filled with enough staple food to feed a woman for four or five months. The minister held a list of the names of 20 legitimate widows. We offered prayer for God’s blessing upon these precious women, and then Randy and I helped to distribute the food to each of them. Friends, we cannot grasp in the U.S. the impact on these women or the bewilderment of the Hindu community. The light of Christ shines in word and deed throughout this slum.

The minister, Ravi, and his wife and daughter chose to live in the slums among the people, unlike the few other Christian missionaries serving this area, a fact noticed by the inhabitants around them. They face many obstacles, but his countenance brightens as he describes the vision for the work and the Lord’s blessing on his labors. For the first four years they abode in a slum house, but now they enjoy better housing, consisting of one small bedroom/living quarter, a kitchen, a separate bathroom (containing only a toilet, which I could not figure out how to use) and running water and some other modern conveniences.

Ravi conversed (via Nish) about all that the Lord was doing. He also asked some good theological questions about the nature of Christ’s resurrected body in heaven. The flow of spiritual conversation demonstrated his obvious devotion to the Lord Jesus, and left us greatly edified by his fellowship. I assured him that I would convey his story to many back in America and that we would seek the Lord’s blessing for him in prayer.

In this post I have discharged my commitment to inform you of the need. Now it falls to your families to join me in offering prayers for the advance of Christ’s kingdom here.

“Because the Lord a father is
unto the fatherless;
God is the widow’s judge, within
his place of holiness.

God doth the solitary set
in fam’lies: and from bands
The chain’d doth free; but rebels do
inhabit parched lands.”

P.S. The pictures include:
Ravi and his wife and daughter
Pictures of the slums from the roof.
The contents of the 50 lb. sacks. 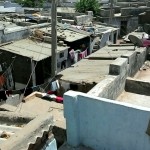 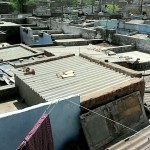 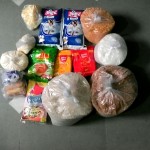 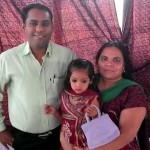